Millimetre wave spectrum auction in the US

The FCC announced the conclusion of Auction 103

The Federal Communications Commission announced the conclusion of Auction 103, its third auction of 5G suitable millimetre wave spectrum to date. The process started in December 2019 and involved frequencies in the upper 37GHz, 39GHz, and 47GHz bands, offering a total of 3,400 MHz of spectrum. The auction bid reached 7.6 billion USD (6.9 billion EUR). The price per MHz per capita for 10 years is 0.06 cEUR. The amount is much inferior to the price of past auctions in the 24 and 28 GHz bands.

Price (cEUR) per MHz per capita for 10 years 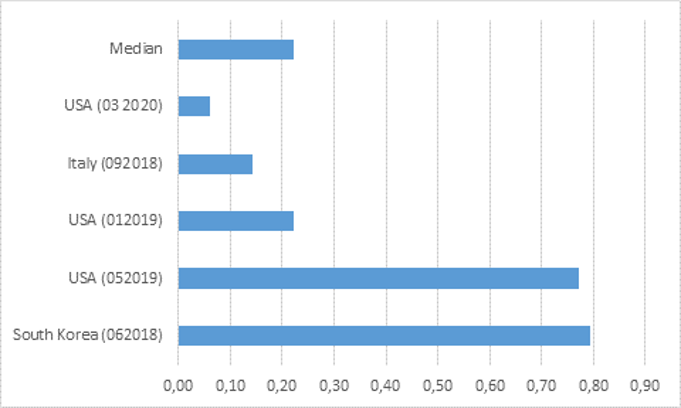 ← 5G subscriptions in South Korea and China
Ofcom finalizes rules for upcoming 5G spectrum auction →
Subscribe to our mailing list
We use cookies on our website to give you the most relevant experience by remembering your preferences and repeat visits. By clicking “Accept”, you consent to the use of ALL the cookies. However you may visit Cookie Settings to provide a controlled consent. More infos.
Cookie settingsACCEPT
Manage consent